We also offer our cyclist clients lactate testing on our Watt Bike. In short, we will ask you to perform a series of specific power output intervals on the Watt Bike for a specific amount of time. At the end of each interval we will take a drop of blood and analyse it to ascertain the levels of lactic acid in your blood at that given intensity. We then can best advise you on specific heart rate or power levels to maximise your training effect whilst cycling. In effect it takes the guess work out of your training.

To stay alive our bodies need energy. This energy is supplied by two systems, the aerobic and the anaerobic systems. It is these two same systems that supply our muscles with the required energy to exercise.

The aerobic system is highly efficient as its fuel comes mainly from fat; it needs a constant supply of oxygen though to operate. We derive our low intensity energy requirements from the aerobic energy system.

During our lactate test we will ask you to perform a series of intervals at different powers on the Watt Bike. At the end of each of these intervals we will take a sample of blood and measure it for lactate. As the interval intensity increases the more lactate your body will produce until eventually it is producing more than it can remove, leaving more and more in the blood. It is these corresponding blood lactate readings that will enable us to ascertain at what point your body went from being a highly efficient fat burner to a not so efficient carbohydrate (sugar) burner.

At the end of the test we can tell you in heart rate or power the intensities where you should be training to optimise your training effect for your event. If for instance your goal event is the Wicklow200 or The ring of Kerry your training would be quite different from say the training of someone attempting Paris-Nice.

If we were to train you for Paris-Nice we would be training your fat burning aerobic energy system to the max. Although, this wouldn’t mean we’d have you tooling around at low intensities for months on end. No, we would be using the full range of intensities including sprints as these have been proven to dramatically increase the aerobic fitness levels of trainees. Crucially though, we would test you again after approximately 8 weeks as your aerobic threshold will change as you become more efficient.

You wouldn’t want to be training at your old intensities, would you?

You can see from the graph on the left that the lactate readings of the athlete are increasing as the Power (w) increases incrementally throughout the test.

Showing the athletes heart rate increased as the power increased.

The graph on the left is displaying how an athlete’s lactate profile increased as the power (w) increased. You can see at the start of the test or ~225 watts the athlete was just under 2mMol of lactate, then at 250 watts just over 2mMol of lactate and then his lactate started to climb rapidly as the power (w) increased and he was relying entirely on his anaerobic energy system.

At the end of the lactate test we do an all-out maximum 1 min effort, after which we let the lactate accumulate for 1 minute before taking a drop of blood and making the reading. Depending on the amount of lactate in the blood we can get a good idea of the predominant type of muscle fiber a person may have. Understanding this can have a significant impact on the type of training or the race strategy you should be following.

Below is a taste of the software used to analyse your sessions. This is one of Stephen’s sessions from 2013. You can see power, heart rate, cadence and speed displayed in different colours. 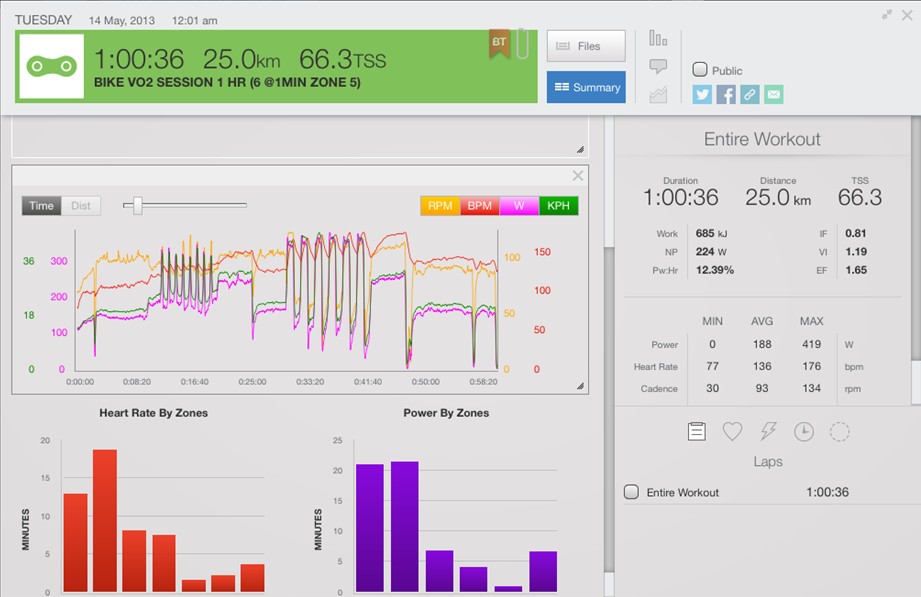 All of our clients will have their own TRAINING PEAKS account with us and can view all the sessions as displayed above. You will also be able to communicate with us through this hub and post your sessions done by yourself for further analyses if you have the correct pieces of kit on your bike recording the data so you can upload. We can then track every segment of your fitness levels and output, enabling you to train effectively and efficiently. 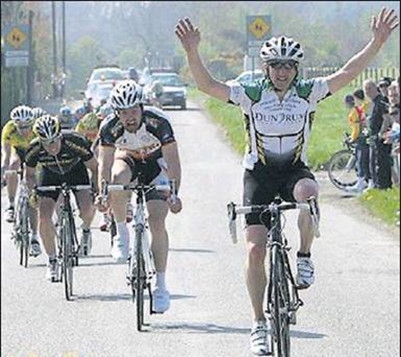 Stephen started competitive cycling quite late in life at the age of 30. He was instantly hooked by the speed and the intensity of bike racing. Stephen rode as an elite domestic cyclist from 2006 to 2014.During this time he won the Stamullen Gp and the Mountnugent Gp. Riding the (An Post) Ras several times and winning the coveted county rider prize on stage 5 in 2012,to name a few.

He came into strength & conditioning after seeing how well a properly structured programme worked to rehab a knee injury which he was told would probably end his cycling career. He had struggled with the injury for a significant period of time, seeing specialists and a series of physiotherapists, none of whom could fix the issue.