The true story of Cortisol 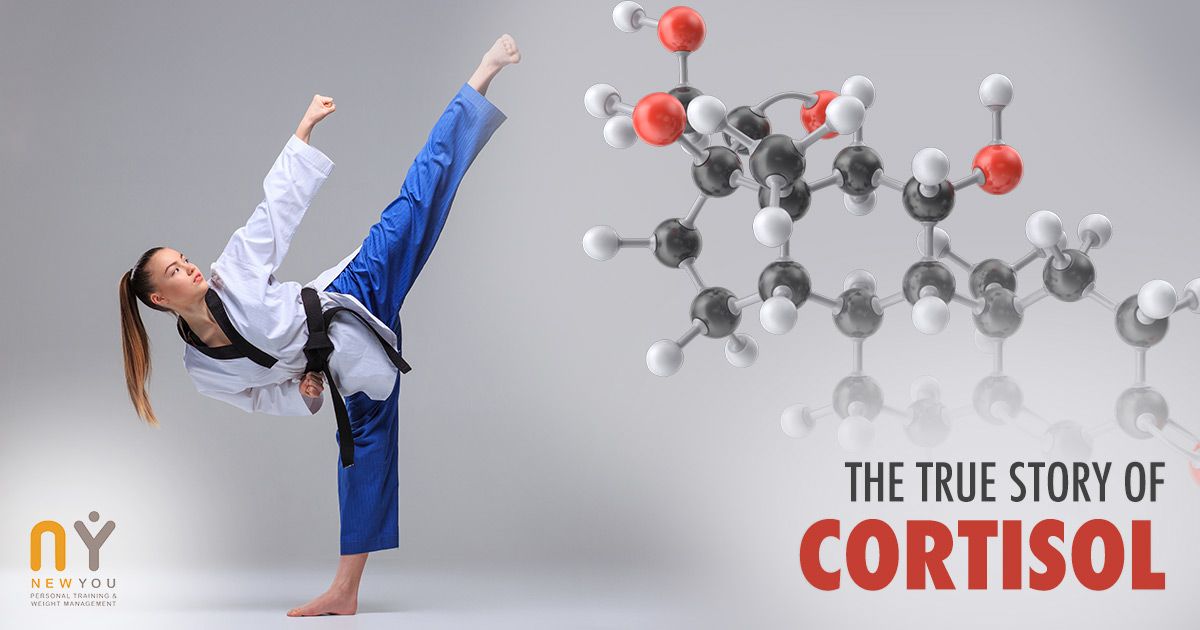 Believe it or not, there's no hormone in the body whose primary purpose is to destroy the body. Cortisol has many key functions, but sometimes the hormone causes a little collateral damage when it comes to looking and feeling your best. Let's take a closer look.

The Functions of Cortisol

I call cortisol the "readiness hormone" rather than the stress hormone. Its main purpose is to make sure you'll be capable of facing any potentially threatening situation.

Note: You can't dissociate cortisol from one of its functions. When it's elevated, all of the six things above will happen.

So, cortisol is actually quite necessary. It's essential to have a boost in cortisol when you're squaring or deadlifting. But if it stays elevated for too long it can have some serious negative side effects. Let's take a look at how that affects our muscle density, fat loss, recovery, and well-being.

Note that after a workout, protein synthesis is elevated above baseline for 24-36 hours (although significantly only for 24-30 hours). This is the timeframe you have to repair the damage and add new tissue. If your immune system is weak, it might take you the full duration just to repair the damage you caused. This means you don't have time in that enhanced state to add muscle. It's a predicament that can make muscle growth a very slow process.

Cortisol is, in fact, a fat loss hormone, at least when produced in a pulsatile manner. But that doesn't mean chronic cortisol can't make it harder to lose fat. While a short-term elevation of cortisol is involved in fat loss, if it becomes chronically elevated it can make the fat loss process harder. How? Two ways...

1 – Cortisol can decrease the conversion of T4 into the active thyroxin T3.

If T3 goes down, so does your metabolic rate. So T4 doesn't have as much of a direct impact. The body produces mostly T4 and converts it into T3 at the level deemed safe for survival by the body.
If you're chronically deprived of energy though, the body will reduce the T4 to T3 conversion, decreasing your metabolic rate. During our evolution, when cortisol was elevated chronically, it meant that we weren't able to find food and that, as a result, cortisol always had to be high to keep blood sugar stable and mobilize stored energy.

It adjusted by reducing T3 levels to lower energy needs. Back then, we needed that adjustment. Sadly, nowadays chronic cortisol elevation can come from many stressors, and even if we aren't in a deprived state, the chronic cortisol issue will still lead to a decreased T4 to T3 conversion.

2 – It can lead to glucose intolerance and insulin resistance.

Cortisol increases blood sugar levels. When we were cavemen and women, that wasn't a big problem because cortisol normally spiked when we had to be physically active (fighting or running away) or were lacking food. So, we'd use the released glucose for energy.

But if blood sugar increases while we're sedentary, it just stays there, leading to hyperglycemia. The body doesn't want that, and it will release insulin to bring blood sugar back down to normal levels. All is fine and good, right? Not really.
If cortisol is chronically elevated it means it'll constantly increase blood sugar levels, which in turn will lead to frequent releases of insulin. That can lead to insulin resistance.

Keep in mind, insulin alone won't make you fat. It can only store the nutrients you ingest; it doesn't create new nutrients. If you eat in a caloric deficit and have high insulin you won't gain fat.

However, insulin can make it harder to mobilize stored fat. As long as insulin is elevated above baseline, it'll be harder for you to mobilize fat efficiently. When you're insulin resistant, it means that your cells don't respond well to insulin. As a result, you need to produce more to do the same job. If you produce more, it takes longer to bring it back down. If it stays elevated for longer, you spend more time in a state where fat mobilization is less efficient.

Cortisol breaks down muscle - converts it to glucose and makes you glucose intolerant, inhibiting this energy source from making its way to your active cells ( muscle and brain ) whilst driving glucose to be stored as Visceral fat.

Cortisol isn't a fat gain hormone, but its chronic elevation can make it harder to lose fat over time.

It'll have a negative impact on your recovery when chronically elevated:

Chronically elevated cortisol affects well-being, especially mental well-being. But it's a bit more complex because it impacts neurotransmitters. The key thing to remember is that cortisol leads to an elevation of adrenaline (epinephrine). So when cortisol is chronically elevated...

The effects of cortisol are even more far-reaching than that, but that's the gist of it. The bottom line? Short spurts of cortisol at the right time (in the morning and when you're lifting) is very useful, but chronic elevation can quickly become problematic if you want to look good and feel good.

How to Control Your Cortisol

"Become at peace with the universe." Instead, let's get at the training, nutrition, and sleep strategies.

Train with Intensity but don't overtrain. It's not necessarily about who trains the hardest but it's more about being smart. High volume workouts can leave the body in a sea of cortisol. Get the job done and get out. Spend more time recovering and less time training

Eat regular meals throughout the day and whatever you do don't skip breakfast. Make sure each meal is a balance of protein quality carbs and fats. This mechanism if eating will suppress Cortisol and regulate your insulin levels, enabling you to release more growth hormone during sleep.

Recovery and repair of your cells during sleep is greatly dependent upon the release of GH. Which in turn is dependent upon your eating patterns. GH tells your fat cells to dump some of their cargo, these fatty acids are then transported to your liver where they are burnt as an energy source to produce IGF 1 which is like a fuel injection system directing amino acids into your cells for recovery and building. And lastly get to bed early, staying up late can have a significant effect upon nocturnal Cortisol levels.